The kingdom of Maiwa is located on Sulawesi, in the District of Enrekang. This kingdom was part of the federation Massempulu, which existed in the 14th century.
The title of the king is Arung.

Maiwa is a small kingdom ruled by a King (Arung) before it was incorporated in the Federation Massenrempulu. This kingdom had been developed especially in the field of religion where during the leadership Pua’ta Lundu (1602-1625) was the first time the entry of Islam.
The entry of Islam in this Kingdom was closely linked to the entry of Islam in Sidenreng, where it is mentioned in Lontara Gowa Tallo, that the Sidenreng Rappang region converted to Islam in 1609, while one of the sons of the Maiwa king Janggo Ridi returned from Gowa carrying Islamic teachings in 1608. Janggo ridi is the first person who accepted Islam, because after him then there are delegates to study Islam like I pua ‘and Matindoi in Langgara’na.

NB:
Info dari Andi Anugerah: For my inauguration procession there is no info ever done induction procession in custom. Incidentally Andi Amang is the younger brother of Almr. My father, Andi Amiruddin Hodeng

Since the XIV century, the region of Enrekang is called Massenrempulu ‘which means marginalize the mountain or along the mountain, while the Enrekang name from Endeg which means Rise From or Climbing and from here the origin of the name Endekan.
Historically, in the beginning Enrekang Regency was a large kingdom called Malepong Bulan, then this kingdom is Manurung with a federation that combines 7 regions / kingdom better known as the “Pitue Massenrempulu” federation, namely:

Because the Politics of Devide At Impera the Dutch government broke this area with the Decree of the Royal Dutch Command (KORTE VERKLARING) where the kingdom of Kassa and the kingdom of Batu Lappa was put into Sawitto. This occurred ± 1905 (XX century), so to remain in the state of FIVE MASSENREMPULU, the kingdoms within it are broken down into:
* Enrekang
* Maiwa
* Alla
* Buntu Batu
* Malua

During the dutch time the kingdoms were called “Landschap”. 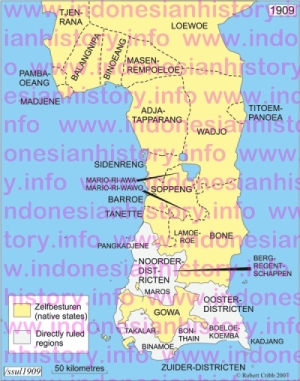