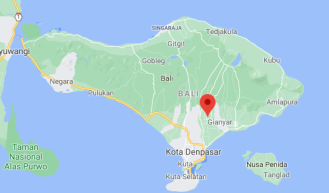 * Line of kingdoms on Bali: link

History of the palace of Peliatan, since the 17th century

By the 17th century Bali invariably experienced a rapid emergence of new kingdoms, including the founding of several royal houses in Ubud. However, this period also saw much conflict between the royal clans with supremacy as the ultimate goal. A prince from Klungkung was sent to create a palace in Sukawati as a centre of great power and aesthetic beauty. Artisans came from all over Bali to help in its construction and once completed many of them chose to stay. Sukawati today is a community that strongly supports all forms of artistry as well as dance and music.
With the successful establishment of a reigning authority in Sukawati, palace retainers were then sent in the late 1700’s to secure the area of Ubud. A pair of cousins formed rival communities in Padang Tegal and further north in the area of Taman. Following subsequent fighting between these neighbouring villages the king of Sukawati sent his brothers Tjokorde Ngurah Tabanan to Peliatan and Tjokorde Tangkeban to Sambahan to establish palaces with the notion to control these troubled areas.

Despite early feudalistic struggles between the kingdoms of Peliatan and Mengwi, the two overcame their differences following a battle that is said to have involved magical powers. Thereafter, the people of Mengwi moved to help populate Ubud and during the latter 1800’s the entire area began to flourish with plentiful rice supplies and a booming economy.

Entrance-gate of the Puri Saren Agung in Ubud