The kingdom of Nagekeo was founded in 1919; located on Flores. District of Nagekeo.

Location of Nagekeo on Flores

Raja Muda Marselinus/Selly Fabianus Adjo Bupu. He is one of the 2 chiefs of the raja dynasty of Nage and son of the former dynastychief Loduwek Djago Dede, who succeeded 1972-9 his father; last ruling raja, as dynastychief of Nage. Since 2014 (until 2019 ) he is chief of the DPRD/parlement of the kabupaten Nagekeo. Sumber: D. Tick, FB.

History of the kingdoms of Nage, Keo and Nagekeo

The history of the kingdom of Nagekeo was influenced by the Dutch colonial government at the time. The Dutch East Indies founded a new government that was very different from the existing traditional system. Previously, the people lived in groups: “ulu eko”, “ili woe”, “boa ola”, which were autonomous and there was no higher structure on it. However, because of colonial Dutch colonial interests, there was formed a new structure on it, namely “zelfbesturende Lanschap” or “Landschap Bestuur” led by a “zelfbestuurders” or king, who was appointed by the Dutch from the most influential local leaders.
The influence of the Dutch colonial government until the formation of the kingdom of Nagekeo was as follows:
In 1907, under the leadership of Kapitan Christoffel, the Dutch colonial government seized the Larantuka to Manggarai.
1909 uprising of Marilonga in Ende; in 1910, whole Flores was entirely subject to the Dutch colonial government
1912, there were formed 27 “Landschap Bestuur” on Flores, and one of them was Landschap Bestuur Nage under the leadership of Oga Ngole, centered in Boawae.
On April 18, 1917, there was a meeting between the Dutch government with the King of Nage, Oga Ngole and King of Keo, Muwa Tunga in Boawae, to initiate the merger of the autonomous Nage and Keo, called kingdom of Nagekeo. This idea however could only be realized after the kings died.
On January 26, 1931, the Dutch colonial government inaugurated Joseph Juwa Dobe Ngole, as King of Nagekeo, and as a symbol of the merger of the autonomous Nage and Keo to become Swapraja Nagekeo. King Josef Juwa Dobe Ngole, died on December 25, 1972
Autonomous Government System was maintained until the time of independence of Indonesia and without going through the formal dissolution, the imperial system itself ends after the Act No. 69 of 1958 on the establishment of areas in the region level II level region of Bali, NTB and NTT. Ngada, which also includes three self-government that is Nagekeo, Ngadha and Riung including one of the 12 autonomous level II NTT. 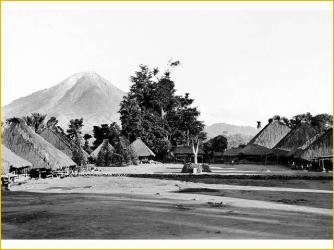 King Roga Ngole (center front) of Nageh-Keo (Nagakeo) and a buffalo to be sacrificed in a traditional ceremony in Boawae. 1920 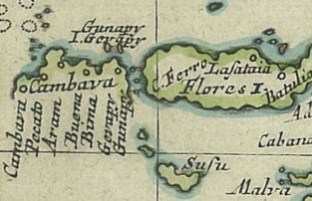