The Sultanate of Jailolo is already know in the 16 century. Located on the island of Halmahera, Prov. Maluku Utara.

The presence of Kaicil Muhammad Siddiq Sjah on the decision of the Jailolo sultanate traditional council is based on 2 considerations, namely:
1) Kaicil Muhammad Siddiq bin Kaicil H. Mahmud bin Kaicil Abdul Jabar bin Kaicil Abdul Rahman Sjah conclusively has a genelogic relationship with Sultan Yusuf bin Sultan Kaicil Jainal Abidin (1527) which can be proven through the original heritage of jailolo sultans from the past .
2) Support of aristocrats of Jailolo, Ternate and Tidore. 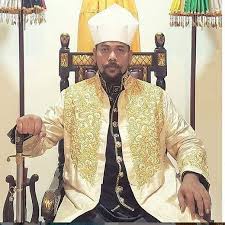 There are 5 sultanates in North Maluku: Ternate, Tidore, Bacan, Jailolo dan Loloda.
Jailolo is a kingdom, established in 1521 AD.
Jailolo’s first king is the king who converted to Islam 9th century, and was named Sultan Hasanuddin.
Its territory covered most of the coastal island of Halmahera and Seram.

Ca. 1550 Jailolo came under the influence of Ternate. One source said,that the last descendant of the kings of Jailolo (then called a raja) died in exile on Ternate in 1715.
But the members of the direct line, or the Doa line claim, that with that fact the rights to the throne of Jailolo had not been ended. From 1715 the rights to the raja title went to a side line. From there the rulers of the restored Jailolo sultanate descended: Raja Muhammad Arif Bila, who helped ca. 1800 the rebellious Sultan Nuku of Tidore; a national Indonesian hero and later after him his 2 sons, who only could rule over a segment of the Jailolo people, who were allowed to resettle themselves in the north part of Ceram and after the last sultan of Jailolo there was deposed went back to Jailolo in Halmahera totally.
The last sultan there was deposed 1832 (Sultan Muhammad Asgar; died 1839), because he not really coöperated with ending the piracy in the area. A descendant from that line, Dano Baba Hasan was pretender sultan 1875-76 and his descendant Dano Jaeuddin also was pretender in 1914.
A descendant of Dano Baba Hasan was discovered in in Sumatra by Sultan Mudafar II Syah. He had a plan to make the system of 4 kings/Maloku Kie Raha; of again functioning to give stability again to the area.
After a confusing period, in 2015 was installed the new sultan, Kaicil Muhammad Siddiq.
– Source: http://kerajaan-indonesia.blogspot.co.id/2010/12/sultan-of-jailolo-north-moluccans.html?m=1