Batavia was the capital of Dutch East Indies, untill 1945. Today it is called Jakarta, officially “the Special Capital Region of Jakarta”, it is the capital of Indonesia.

Jayakarta (1527–1619)
The determination of Jakarta’s anniversary on June 22 by Sudiro, the mayor of Jakarta, in 1956 was based on the occupation of Sunda Kalapa Harbor by Fatahillah in 1527. Fatahillah changed the name of the city to Jayakarta which means “city of victory”.

Batavia (1619-1942)
The Dutch came to Jayakarta around the end of the 16th century, after stopping in Banten in 1596. Jayakarta in the early 17th century was ruled by Pangeran Jayakarta, a relative of the Sultanate of Banten. In 1619, the VOC led by Jan Pieterszoon Coen occupied Jayakarta after defeating the Banten Sultanate and then changed its name to Batavia.

Djakarta (1942-1945)
The Japanese occupation began in 1942 and changed the name Batavia to Djakarta to attract the hearts of the population during World War II. This city was also the site of the Proclamation of Independence of the Republic of Indonesia on 17 August 1945 and was occupied by the Dutch until the recognition of sovereignty in 1949.

Jakarta (1945 – present)
Since independence until before 1959, Djakarta is part of West Java Province. In 1959, the status of the City of Djakarta underwent a change from a municipality under the mayor to be upgraded to a first-level region (Dati I) led by the governor. The first governor was Soemarno Sosroatmodjo, an army doctor. The appointment of the Governor of DKI at that time was carried out directly by President Sukarno. In 1961, the status of Djakarta was changed from a First Level Region to a Special Capital Region (DCI, now spelled as the Special Capital Region / DKI) and the governor was still held by Sumarno. 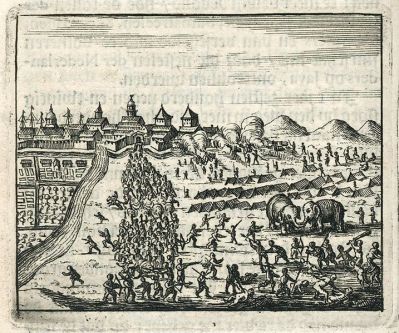 Long before Islam arrived in the region, Jakarta was part of one of the oldest and most powerful Hindu kingdoms in Indonesia. From the 4th century onwards, the Tarumanagara kingdom controlled the perfectly situated port area where Jakarta now stands.

As this kingdom fell into decline in the late 7th century, its territory was absorbed into the larger Kingdom of Sunda, which reigned over the area until the 16th century.

The first Europeans began to arrive in the 1500s, looking for a sea route for the trade in spices. Several Portuguese ships from Malacca, Malaysia, landed in Jakarta in 1513 and the Kingdom of Sunda was receptive to their proposals of trade. They signed a treaty with the Portuguese that allowed the foreigners to build a defensive port as protection against the increasingly powerful Sultanate of Demak ruling Central Java.

The tactic failed, however, and in 1527 a Javanese general from Demak sacked the city, drove out the Portuguese and renamed the port town Jayakarta. From then on, Jakarta was a fiefdom of the Sultanate of Banten, who had control over the Demak Sultanate. Of note, the name came from Prince Jayawikarta of Banten.

The Sultanate of Banten had developed a reciprocal relationship with the Dutch colonial powers of the time. Prince Jayawikarta invited Dutch ships to dock here in 1596. A few years later, in 1602, ships from the British East India Company were also permitted to dock here. The British loved the location of Jakarta so much that they were allowed to build a trading post here, and this remained the British centre of Indonesian trade until the year of 1682.

Of course, the Dutch and English were fierce rivals. When Prince Jayawikarta played them off against each other, the Dutch got angry and relations devolved into a small war that resulted in the defeat of the British and the subsequent removal of Prince Jayawikarta. The Dutch renamed the city Batavia in 1619 to celebrate their victory.

On August 25, 27 Mataram ships again entered the bay, but anchored some distance from the Kasteel. South of Batavia, Mataram soldiers began arriving, war banners flying. Mataram had made it clear that it wanted to attack the Dutch. The next day, 1,000 Mataram soldiers mounted their horses in front of Batavia. On August 27th, they attacked the small fortress “Hollandia” in the southeast of the city.

The second army arrived in October led by Pangeran Mandurareja (the grandson of Ki Juru Martani). The total was 10,000 soldiers. War broke out in Fort Holland. Mataram troops suffered destruction due to lack of supplies.

The invasion of Batavia in 1628 by Sultan Agung

Sultan Agung returned to attack Batavia for the second time the following year. The first troop led by Adipati Ukur departed in May 1629, while the second, led by Adipati Juminah, departed in June. In total, all 14,000 were soldiers. The failure of the first attack was anticipated by establishing hidden rice barns in Karawang and Cirebon. But the VOC using spies managed to find and destroy everything. This caused the Mataram troops to lack supplies, plus the epidemic of malaria and cholera that hit them, so that the strength of the Mataram army was very weak when it reached Batavia.

As the capital of the Dutch colonies, Batavia boomed almost overnight into a major port city. Chinese and Indonesian immigrants flooded in, straining resources and relations. The 1700s and 1800s were rather turbulent times in the city, as Jakarta’s history was being forged by Dutch policymaking that didn’t always take the interests of the local inhabitants into account.

After World War II ended, Indonesian nationalists declared independence on 17 August 1945, and the government of the Jakarta City was changed into the Jakarta National Administration in the following month.
After securing full independence, Jakarta again became the national capital in 1950.
In 1966, Jakarta was declared a ‘special capital region’ (Daerah Khusus Ibukota), with a status equivalent to that of a province.

* Foto of Batavia / Jakarta in the past: link 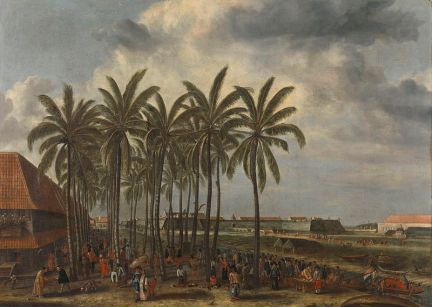 Kota Tua is a remainder of Oud Batavia, the first walled settlement of the Dutch in Jakarta area. It was an inner walled city with its own Castle. The area gained importance during the 17th-19th century when it was established as the de facto capital of the Dutch East Indies. This inner walled city contrasted with the surrounding kampung (villages), orchards, and rice fields. Dubbed “The Jewel of Asia” in the 16th century by European sailors, the area was a center of commerce due to its strategic location within the spice trade industry in the archipelago.

The first concrete plan of Kota Tua revitalization was signed in December 2004 by Jakarta Old Town-Kotaku and the government of Jakarta. The commencement of the revitalization plan was started in 2005. Taman Fatahillah Square was revitalized in 2006.

In 2014 the city’s governor at that time Joko Widodo continued the restoration plan of Kota Tua. The project, named “Jakarta Old Town Reborn” (JOTR), is a cooperation between state-owned enterprises, the municipal government and the private sector.

The building was built in 1710 as the Stadhuis (city hall) of Batavia. Jakarta History Museum opened in 1974 and displays objects from the prehistory period of the city region, the founding of Jayakarta in 1527, and the Dutch colonization period from the 16th century until Indonesia’s Independence in 1945. 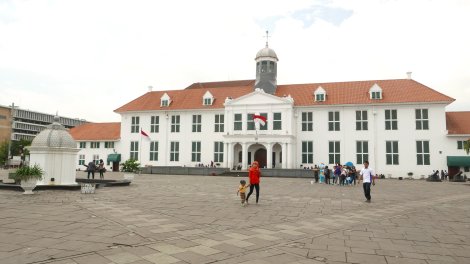