The country of Kisar is located in the prov. of Maluku, on the island of Kisar.

Location of the island of Kisar

Raja Bakker is the 13th raja since the 17th century.
Bakker comes from the name of a Dutch colonial official. His ancestor Raja Cornelis Bakker took that name, because hoped with that name also to become as influental as the Dutch people.

On the island here was a Dutch contigent of soldiers. These Dutchmen were left behind and forgotten and married with local woman. So a little new people of mixed Dutch-Kisar blood was made. These families later intermarried with the raja dynasty. So the present Raja of Kisar has Dutch blood in his veins to.
On the picture he is depicted with Crownprince Philipus Hairmera Bakker; the son of his younger brother Prince zacharias, because he only has a daughter.
The history of the princpality is written down in an impressive book, who is after the Bible the most important book on the island.
The different peoples on the island have some kind of autonomy under their own traditional leaders. The palace of the raja is in the town of Wonreli.   (Source: kerajaan indonesia) 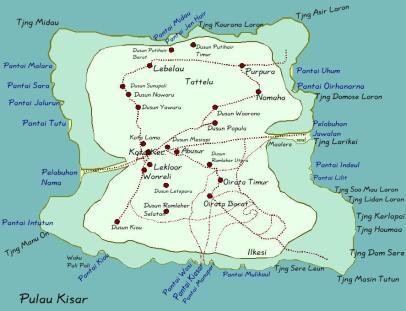 The Dutch and the Portuguese before them showed little commercial interest in Kisar, although its ruler did persuade the Dutch to establish a small defensive garrison on the island in 1665 following threats from the Portuguese and a surprise raid by the Sultan of Tidore. Under the command of distant Banda and later Ambon, their presence remained purely symbolic and as Dutch interest waned in the late 1700s, the residual occupants of the garrison remained on the island, marrying local women of both Dutch and Kisar descent. Their mestizo offspring formed a separate community, which considered itself superior to the native population. Early attempts by missionaries from Ambon to evangelise the island turned out to be a dismal failure.

Meanwhile in 1721, Fataluku immigrants from East Timor arrived on Kisar and established a small enclave in the region of Oirata. They too kept themselves socially detatched and linguistically segregated from the rest of the island, forming a second self-contained community.

Although Kisar received numerous seaborne visitors during the nineteenth and early twentieth century, it remained relatively isolated, the main points of contact being Ambon, East Timor and the neighbouring culturally similar South Western Islands. Since the 1920s the island has been left to its own devices, apart from three years of barbaric occupation by the Japanese. That isolation continued following Indonesian independence and actually worsened following the invasion of Portuguese Timor by the Republic of Indonesia in 1975.

Whilst the island still remains highly undeveloped it has received increasing political attention since the 1990s and a limited amount of modernisation. Although communications with the outside world are improving, Kisar still retains an air of mystery and fascination.