The Palace Puri Agung Kesiman, is located in the village of Kesiman, Denpasar. It was founded in 1779.

About the king of Puri Agung Kesiman

History of the Palace of Kesiman, founded in 1779

In the early 16th century, the Majapahit dynasty moved its central government to Gelgel. During the reign of King Dalem Waturenggong, Gelgel reached the height of its glory by making it a center of government and culture.
Due to various rebellion events, early in the 18th centurie the center of government was moved from Gelgel to Semarapura.

At that time the king’s relatives spread throughout Bali as representatives of government in areas as Badung, Jembrana, Tabanan, Karangasem, Bangli, Buleleng, and Gianyar. The Semarapura kingdom (Klungkung) remains the seat of government.

At the beginning of the establishment of the kingdoms of the relatives of the puri’s, all still respect the sovereignty of Semarapura as its lord. But because of various things, eventually the kingdoms are sovereign. One of them is the kingdom of Badung which has a large area, and has trade relations with other areas through the port of Kuta and Sanur. The royal dynasty of Badung, descend kings who collectively rule the kingdom of Badung the Puri Pemecutan, Puri Denpasar and the last Puri Kesiman. 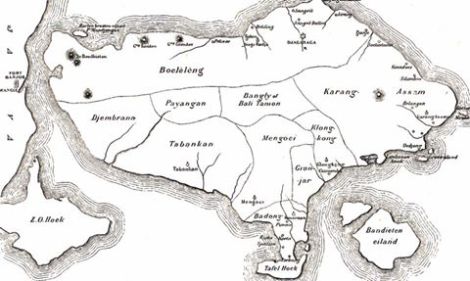 Puri Kesiman is a Puri (palace) in Badung regency. Founded by I Gusti Ngurah Made Pemecutan after Puri Satria was destroyed by his sister I Gusti Ngurah Rai in 1779. After the building was destroyed, it was not possible to  rebuilt the palace, finally was decided to move the construction site to Kesiman Denpasar Village.