History of the kingdom of Sama Indra, 14th century

According to M. Junus Jamil, the tribe, who inhabited this kingdom came from Mon Khmer the Campa State. The tribe of Khmer Mon came to Poli several centuries BC. This group was led by Sjahir Pauling, who became known as Sjahir Poli. They mingled with the surrounding community, who had previously inhabited the area.

After settled in the area (Pidie-red), Sjahir Poli established an empire called Sama Indra Kingdom. At that time they still adhered to Mahayana Buddhist or Himayana Buddhism.

Over time the Sama Indra Kingdom split into several small kingdoms. Like the breakup of Indra Purwa Kingdom (Lamuri) into Indrapuri Kingdom, Indrapatra, Indrapurwa and Indrajaya known as Panton Rie or Kantoli kingdom in Lhokseudu.

Sama Indra Kingdom became the rival of Indrapurba Kingdom (Lamuri) in the west and the kingdom Plak Plieng (Kingdom of Panca Warna) in the east. The kingdom of Sama Indra experienced shocks and heavy changes at that time, According to M Junus Djamil, in the mid-14th century residents in the Sama Indra Kingdom switch from the old religion to the Islam, after the kingdom was attacked by the Kingdom of Aceh Darussalam led by Sultan Mansyur Syah ( 1354 – 1408 AD). Furthermore, the influence of Islam brought by people from the Kingdom of Aceh Darussalam continued to erode the teachings of Hindus and Buddhists in the area.

Maps of Aceh in the past

Aceh, 1646. Achem, from ‘Livro do Estado da India Oriental’, an account of Portuguese settlements in the East Indies, by Pedro Barreto de Resende 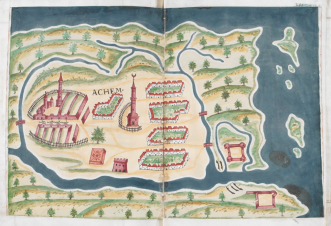 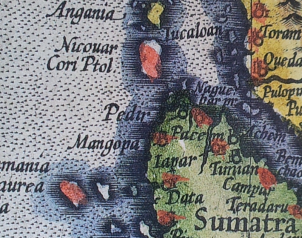