The Malay Kingdom is the name of a kingdom, that once existed on the island of Sumatra. In general, this kingdom is divided into two periods, namely the Old Malayu Kingdom in the 7th century based in Minanga Tamwan, and the Malayu Muda Kingdom in the 13th century centered on Dharmasraya.
Based on the location of the capital, Old Malay Kingdom, sometimes called Jambi Malay kingdom, in the 7th century, was based in Minanga Tamwan. Young Malay kingdom is sometimes referred to as the Kingdom of Dharmasraya, in the 13th century, based on Dharmasraya.

From the evidence and information from the inscriptions and news from China, it s known, that this kingdom began in the 7th century, based in Minanga; in the 13th century it was based in Dharmasraya; and the beginning of the 15th century it was centered in Suruaso or Pagaruyung.
Knowledge of the Malay kingdoms, is among others known from two books by the Reverend, I Tsing, or the I Ching (義 淨; pinyin Yi Jing) (634-713).
. 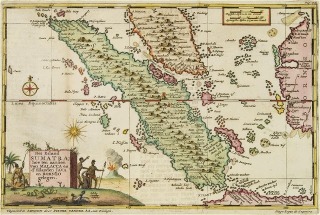