The kingdom of Wengker: about 986-1037; located in district Ponorogo, prov. of East Jawa.

After the kingdom in Central Java Medang disappeared, Mpu Sindok moved to East Java in 928. Mpu Sindok first ascended the throne as king of Medang in East Java in 929 AD, titled Sri Isyana Wikrama Darmatunggadewa, who became the ancestor of the kings of Java over 300 years in a row. He ruled with the queen Parameswari Sri Wardani mpu Kbi (Putri Rakai Wawa), to run the government. In the book “Chronicle Ponorogo” from Purwowijoyo, is mentioned, that in addition to the Mpu Sindok there was another group that moved to East Java led by Ketut Wijaya, the son of the king of Medang. He then founded a kingdom named Wengker. Ketut Wijaya was in power from 986 -1037 AD.

Wengker under the kingdom of Majapahit

The Majapahit empire was a continuation of Singhasari, comprised of certain areas in the eastern and central parts of Java. This area was ruled by the uparaja called Paduka Bhattara who was titled Bhre or “Bhatara i”. This title was the highest title of royalty. Usually this position was only for kin close relatives. Their job was to manage their kingdoms, levy taxes, and send tributes to the center, and manage defenses at the borders of the regions they lead.
During the reign of Hayam Wuruk (1350 s.d.1389) there were 12 areas in Majapahit, which were run by close kin of kings. The hierarchy in the classification of territory in the Majapahit kingdom is known as follows. 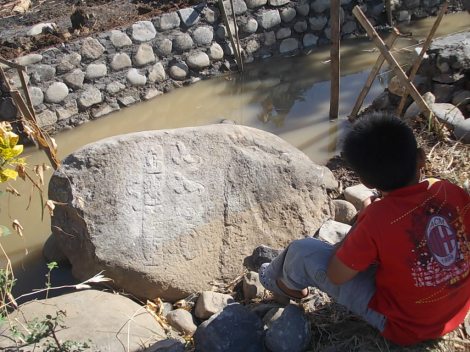 In the village of Ngrenak Ketro Village Sawoo District there is found a inscription that is estimated to be the legacy of the Kingdom of Wengker. The stone is located between the irrigation paddy fields. According to local residents there are already some archaeologists who make observations

Candi Surowono. The temple whose real name is Wishnubhawanapura is estimated to be built in the 14th century to glorify Bhre Wengker, a king of the Kingdom of Wengker under the rule of Majapahit Kingdom. King Wengker died in 1388 AD In Negarakertagama told that in 1361 King Hayam Wuruk of Majapahit never visited even stay at Surawana Temple.