Trowulan: Capital of the kingdom of Majapahit

The Trowulan site was a city site, that used to be the center of the kingdom of Majapahit.
Trowulan as the capital of Majapahit is listed in kakawin Nagarakretagama by Prapanca and recorded in the work of Thomas Stamford Raffles, The History of Java.
It was razed during the invasion of Girindrawardhana to defeat Kertabhumi in 1478.

Trowulan is an archaeological site in Trowulan Subdistrict, Mojokerto Regency, in the Indonesian province of East Java. It includes approximately 100 square kilometres and has been theorized to be the site of the eponymous capital city of the Majapahit Empire, which is described by Mpu Prapanca in the 14th-century poem Nagarakretagama and in a 15th-century Chinese source. When it was the capital of the Majapahit Empire, the city was known as Wilwatikta, which is a name also synonymous with the empire’s name. It was razed during the invasion of Girindrawardhana to defeat Kertabhumi in 1478. After this event Majapahit’s capital was moved to Daha (Kediri). The Trowulan Museum includes a collection of artifacts.

The ancient city ruins at Trowulan had been discovered by the 19th century. Sir Thomas Stamford Raffles, Lieutenant-Governor of British Java, Governor-General of Bencoolen from 1811 until 1816 and an indefatigable enthusiast for the island’s history, reported the existence of ‘ ruins of temples…. scattered about the country for many miles ‘. Much of the region was blanketed with dense teak forest at that time, making detailed survey impossible. Nonetheless, Raffles was so impressed by what he saw that he was later to refer to Trowulan as ‘ this pride of Java ‘.

Trowulan based on sketch Ir. Henry Maclain Pont in 1926 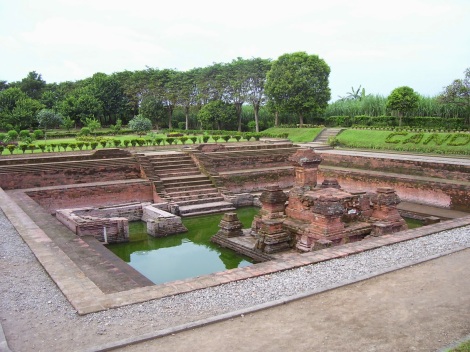 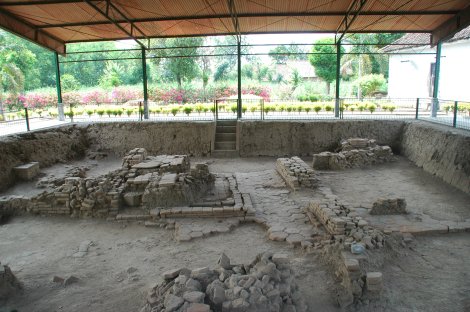