The kingdom of Abui is a very old kingdom on the island of Alor, prov. Nusa Tenggara Timur.

Location of the island of Alor 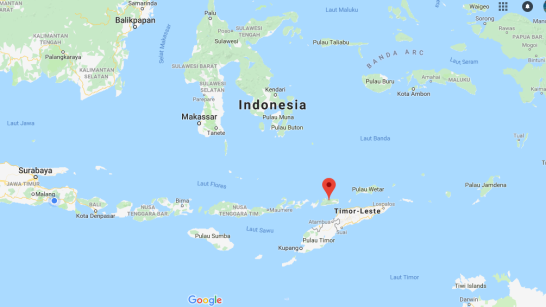 Location of the island of Alor

History of the kingdom of Abui

According to the images circulated in the Alor community, the oldest kingdom in Alor Regency is the Abui kingdom in the hinterland of the Alor mountains and the Munaseli kingdom at the eastern end of Pantar island. Once, these two kingdoms were involved in a Magic War. They use supernatural powers to destroy each other. Munaseli sends bees to Abui instead Abui sends a hurricane and fire to Munaseli. This war was finally won by Munaseli.

It is said that the skull king Abui who led the war is currently still stored in a cave in Mataru. The next kingdom that was founded was a clever kingdom located near the kingdom of Munaseli and the Kingdom of Bali Flower centered on Alor Besar. The neighboring Munaseli and Clever were finally involved in a war that led Munaseli to seek help from the king of Majapahit kingdom, having previously lost the war against Abui.

People of Alor in the past

Kingdoms on the island of Alor

History of the kingdoms on the island of Alor

According to stories circulating in the Alor community, the oldest kingdom in Alor Regency is the Abui kingdom in the interior of the Alor mountains and the Munaseli kingdom on the eastern tip of the island of Pantar. Once upon a time, these two kingdoms were involved in a Magic War. They used magical powers to destroy each other. Munaseli sent bees to Abui, whereas Abui sent a hurricane and fire to Munaseli. This war was finally won by Munaseli.

It is said that the skull of King of Abui, who led the war is currently still stored in a cave in Mataru. The next kingdoms that were founded were the Pandai kingdom which was located near the Munaseli kingdom and the Bunga Bali Kingdom which was centered in Alor Besar. Munaseli and Pandai, who are neighbors, are also involved in a war which causes Munaseli to ask for help from the king of the Majapahit kingdom, considering that he had previously lost the war against Abui.

Around the early 1300s, detachments of the Majapahit royal aid army arrived in Munaseli, but all they found were ruins of the Munaseli kingdom, while the inhabitants had fled to various places in Alor. In the end, many of the Majapahit soldiers decided to stay at Munaseli, so it is not surprising that currently many Munaseli people have Javanese looks. The of sending Majapahit soldiers to Munaseli was the background for the mention of Galiau (Pantar) in the book Negarakartagama by Empu Prapanca which he wrote during the heyday of Majapahit (1367). The same book also mentions Galiau Watang Lema or island coastal areas.

Galiau which consists of 5 kingdoms, namely Kui and Bunga Bali in Alor and Blagar, Pandai and Baranua in Pantar. The alliance of 5 kingdoms on the coast is believed to have a close relationship with one another. Even their kings claim to have the same ancestry.

The founders of the 5 coastal kingdoms were 5 Putra Mau Wolang from Majapahit and they grew up in Pandai. The oldest among them ruled the area. At this time there was an agreement being agreed, where the agreement was called the Lisbon treaty in 1851.

Based on the records of Antonio Pigafetta, a scientist and explorer from Venice, on January 9 to 25, 1522, the island of Alor-Pantar was visited by the ship Victoria, the last remnant of the Magellan fleet. Antonio wrote that when he got to Alor-Pantar, he found the inhabitants of the island as savage as animals and eating human flesh. They have no king and are not clothed. They only wear bark, unless they go to the battlefield.

Historically, during Portuguese rule, the Portuguese in Alor were limited to raising the flag in several coastal areas, such as in Kui, Mataru, Batulolong, Kolana, and Blagar. Likewise during the early days of the Dutch occupation, it was limited to the recognition of the rulers who were on the coast and on the placement of a Posthouder in Alor Kecil, precisely at the entrance to Kabola Bay in 1861.

During the Bouman controller period, several Dutch government employees were brought in. Efforts to Christianize animists have also begun. The first baptism was performed in 1908 on Dulolong beach. At this time Alor consisted of 5 kingdoms, namely Kui, Batulolong, Kolana, Baranusa and Alor. The territory of Alor Kingdom covers the entire Kabola body (northern part of the island of Alor).

In 1912 there was a transfer of the king’s power from the Tulimau dynasty in Alor Besar to the Nampira dynasty in Dulolong. The Dutch colonial government preferred Nampira Bukang to be the king of Alor because he was educated and fluent in Dutch. As compensation, the Tulimau crown prince was appointed as captain of the Overtime. This transfer of power led to several rebellions but was suppressed with the help of the Dutch, so that this transfer of power indirectly became the seed of one of the black pages of Alor’s history with the killing of Bala Nampira. 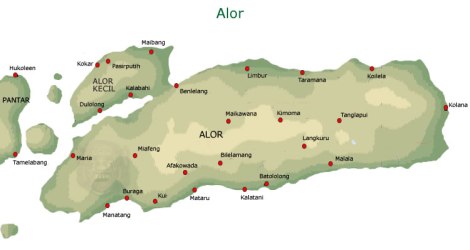 Source (only in indon. language)