The Kingdom of Bolaang Mongondow, previously known as Kingdom of Bola’ang, was a state that ruled over majority of area of the present-day Bola’ang-Mongondow regencies in the North Celebes province of Indonesia, excluding Bola’ang Mongondow Utara regency, which was a territory that was ruled by smaller kingdoms of Bintauna and Kaidipang.

The kingdom was founded in 1670 AD by a Mongondow prince Datu Loloda Mokoagow (died 1695). He was the son of the paramount chief of Mongondow, Tadohe (1600–1670), seated in Kotobangon in the heartland of Mongondow plateau, while the prince established himself at the port settlement of Bola’ang and went to conquer many of the northern shores and inland settlements of present-day Minahasa regencies of northern Celebes peninsula. When he succeeded his father in 1670, he titled himself datu (king) instead of the traditional Mongondow title of punu (paramount chief). This marked the beginning of Kingdom of Bola’ang.

However, on September 21, 1694, a contractual agreement to establish new territorial borders was signed between the Kingdom of Bola’ang and the newly unified federation of Minahasan tribes, backed by the Dutch. The borders were established along Poigar river as the northern border and along Buyat river as its southerly counterpart. The border thus divided the westside territory for Bola’ang and the eastside territory for Minahasan people, which made the kingdom of Bola’ang lose all of its territories and subjects on the east side of the borders. Thus, it left only Mongondow plateau and the adjacent Kotabunan as the territory of the Bola’ang, hence the name Kingdom of Bola’ang-Mongondow was used thereafter.
– Source: https://en.wikipedia.org/wiki/Kingdom_of_Bolaang_Mongondow

Old maps of the Bolaang region 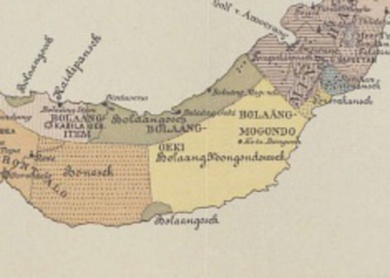 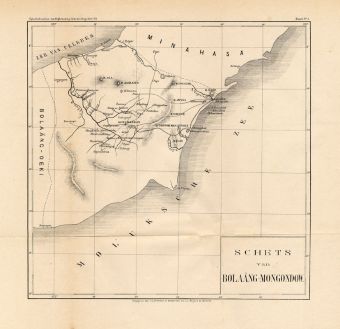 House of the king of Bolmong, foto by Paul dan Fritz Sarasin 22 desember 1893.

House of the king of Bolmong, foto by Paul dan Fritz Sarasin 22 desember 1893.