The Kingdom of Kulawi was a kingdom of the Kulawi People, located in Sulawesi, the Donggala region. Central Sulawesi.
The title of the king is Magau.

Title of the king: Magau.
There is no information about the king today.

History of the kingdom of Kulawi

Kulawi tribes are found around Lake Lindu, Kulawi Plains, Gimpu Plains and around the Koro River Basin (Lariang River for West Sulawesi and Tawaelia in Lore).
In the past, several small groups of Kulawi tribes formed a kingdom called Kulawi Empire. After long time, the Kulawi Kingdom became a big kingdom in the region of Central Sulawesi.
In 1905 in Bulu Momi was a war between the Kulawi people against the Dutch colonial under the leadership of a Kulawi hero Towualangi, who was also called Taentorengke. When the war took place, at the same time the Dutch colonials came to power in Kulawi to make Kulawi a royal area, then in 1906 the Dutch Colonials took Towualangi to become the first king of Kulawi.

The structure of government of the kingdoms in Donggala region was basically the same, the only difference is the use of the term for the royal device according to their respective regional languages. The Dutch East Indies government occupied these kingdoms after wars such as Sigi Dolo war, Kulawi war, Tombolotutu war, Donggala war and other small wars.
The war ended with the signing of a treaty known as “Lange Verklaring”, which was followed by konterverklaring, which in essence was the unification of the Dutch government’s sovereignty over the territories of the kingdom. After being conquered in 1904, it was made an administrative area under the name of the district, apart from a district called onderdistrik. A combination of several districts is called swapraja or called landscap (Zelfs besteweronde landschappen). To govern in this autonomous region there was a “Kort Verklaring”, the Dutch government established a regulation on areas of self-government, that were valid since 1927 and amended in 1938 under the name zelfbestusregelen. 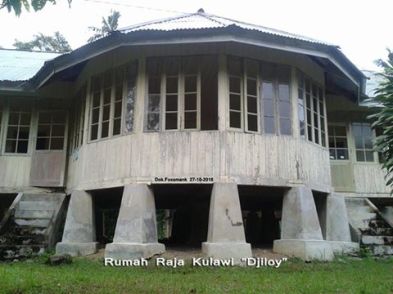 History of the kingdoms in the Donggala region

For the history of the kingdoms in the Donggala region: click here