The Kingdom of Majapahit: 1293 – 1527. Located on east Jawa.
This kingdom reached the peak of its glory as a grand empire that controlled a large area in the archipelago during the reign of Hayam Wuruk, who ruled from 1350 to 1389.

* Foto of the kingdom of Majapahit: link

Majapahit was a vast empire based on the island of Java (modern-day Indonesia) from 1293 to around 1500. Before the founding of Majapahit, Singhasari was the most powerful kingdom in Java.
The exact date used as the date of birth of the Majapahit kingdom was when Raden Wijaya (Kertarajasa Jayawardhana) became king, which is the 15th of the month of Kartika in 1215 saka, which is 10th of nov. 1293. He was named the official name Kertarajasa Jayawardhana.

Majapahit reached its peak of glory during the era of Hayam Wuruk, whose reign from 1350 to 1389 was marked by conquest which extended through Southeast Asia. His achievement is also credited to his prime minister, Gajah Mada. According to the Nagarakretagama (Desawarñana) written in 1365, Majapahit was an empire of 98 tributaries, stretching from Sumatra to New Guinea; consisting of present day Indonesia, Singapore, Malaysia, Brunei, southern Thailand, Sulu Archipelago, Manila, and East Timor, although the true nature of Majapahit sphere of influence is still the subject of studies among historians.

Majapahit was one of the last major empires of the region and is considered to be one of the greatest and most powerful empires in the history of Indonesia and Southeast Asia, one that is sometimes seen as the precedent for Indonesia’s modern boundaries. Its influence extended beyond the modern territory of Indonesia and has been the subject of many studies.

The end of Majapahit

In 1498, there was a turning point when Girindrawardhana was deposed by his vice-regent, Udara. After this coup, the war between Demak and Daha receded, with some sources[who?] claiming Raden Patah, Sultan of Demak, left Majapahit alone as his father had done before, while others said Udara agreed to become a vassal of Demak, even marrying Raden Patah’s youngest daughter.

Meanwhile in the west, Malacca was captured by Portuguese in 1511. The delicate balance between Demak and Daha ended when Udara, seeing an opportunity to eliminate Demak, asked for Portuguese help in Malacca, forcing Demak to attack both Malacca and Daha under Adipati Yunus to end this alliance.

With the fall of Daha, crushed by Demak in 1517, the Muslim emerging forces finally defeated the remnants of the Majapahit kingdom in the early 16th century. And with the fall of Daha, a large number of courtiers, artisans, priests, and members of the royalty moved east to the island of Bali. The refugees fled to the east to avoid Demak retribution for their support for Ranawijaya against Kertabhumi.

Demak came under the leadership of Raden (later crowned as Sultan) Patah (Arabic name: Fatah, lit. “liberator”, “conqueror”), who was acknowledged as the legitimate successor of Majapahit. According to Babad Tanah Jawi and Demak tradition, the source of Patah’s legitimacy was because their first sultan, Raden Patah, was the son of Majapahit king Brawijaya V with a Chinese concubine. Another argument supports Demak as the successor of Majapahit; the rising Demak sultanate was easily accepted as the nominal regional ruler, as Demak was the former Majapahit vassal and located near the former Majapahit realm in Eastern Java.

The development of the Majapahit Empire, originated in Trowulan, Majapahit, East Java, in the 13th century, then expanded its influence over the archipelago, to its ebb and fall in the early 16th century.

The Majapahit kingdom was a continuation of the kingdom of Singhasari, comprised of certain areas in the eastern and central parts of Java. This area was ruled by the uparaja, called Paduka Bhattara which was titled Bhre or “Bhatara i”. This title is the highest title of royalty. Usually this position is only for kin close relatives. Their job is to manage their kingdoms, levy taxes, and send tributes to the center, and manage defenses at the borders of the regions they lead.
During the reign of Hayam Wuruk (1350 s.d.1389) there were 12 areas in Majapahit, which were run by close kin of kings. The hierarchy in the classification of territory in the Majapahit kingdom is known as follows: 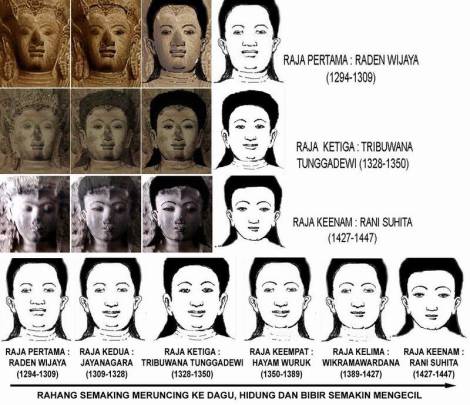 Foto of the kingdom of Majapahit: link
Gimpura Bajang Ratu, the entrance gate of one of the important building complexes in the capital city of Majapahit. The building is still standing at Trowulan.