History of the kingdom of Padang Galugur

There is only the information below about this kingsom.

House of the king

Basically, this building is similar to the traditional houses of the Mandailing tribe in southern Tapanuli with the shape of a residential house and / or house on stilts. In general, this house is made of easy materials such as wood, fibers. Framework of the house is all made of wood, including the walls, doors, windows, floors and poles of the house. Meanwhile, on the top (roof) using the fibers fibers as a roof.
On the west side of Rumah Suri Andung Djati there is a stage building, which is a Palace and also Balai Adat. This building has undergone a refurbishment by not changing the shape and location of the initial building is located. Changes, that have been experienced were only on changing materials from the building that has been damaged.
The walls of the building which originally came from the skin of ohon aren have been replaced with boards as well as the floor of the building. The size of this building has an area of ​​96 m2 length 12 m and width 8 m.
At first this building serves as a residence that according to the owner of the building established sekitan 17th century. Now this building is only used for traditional activities, especially in Huta / Desa Haiti. 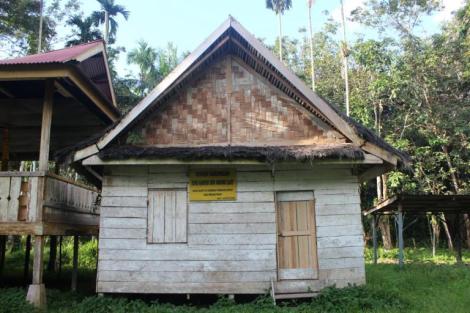