The kingdom of Linge  was a kingdom on Sumatra, Aceh province, District Aceh Tengah; founded in 1025.
During the sultanate of Aceh the small kingdoms in Aceh were the vassal or subordinate sultan of Aceh and led by a king who holds Uleebalang.
After the end of the Aceh War, in 1914, Linge (Linggo) entered Onderafdeling Takengon, as “swapraja”.

History of the kingdom of Linge, founded 1025

The kingdom of Linge was an ancient kingdom in Aceh. The kingdom was established in the year 1025 AD, the first king was Adi Genali. Adi Genali (Kik Betul) had four children, namely: Empuberu, Sibayak Linge, Merah Johan, Merah Linge.
Reje Linge I left to their offspring a sword and a ring, which originated from Sultan Peureulak Makhdum Berdaulat Mahmud Syah (1012-1038 M). This heritage was given, when Adi Genali founded Negeri Linge at Buntul Linge, together with the prime-minister, whose name was Shyekh Sirajuddin, with the title who holds Cik Serule.

During the Dutch colonial period the Linge kingdom became a keujreun led by a keujreun with the title Reje. In 1919 the Keujrun Linge was led by Aman Cahyamani; after his death he was replaced by Sasa Aman Talib. Photo source: Donald Tick, Facebook 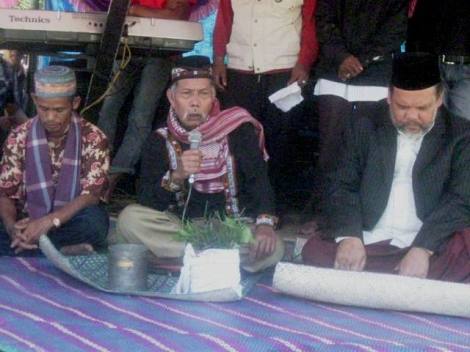 In the Dutch colonial period the Linge kingdom became a keujreun led by a keujreun titled Reje. In 1919 Linge keujrun was Aman Cahyamani after he was replaced by Sasa Aman Talib. Photo source: Donald Tick, Facebook.

Grave of king of Linge