The kingdom of Koto Anau is located on Sumatera, provinsi Sumatera Barat, District Solok.
This kingdom exists since the 12th century.

History of the kingdom of Koto Anau

Koto Anau Kingdom existed since the 12th century, during the reign of Pitalo Jombang, who married Puti Sari Mayang, who was a relative of the Malay King of Jambi. The king of Pagaruyung and the king of Koto Anau had a kinship relationship, both descendants of the Malay Kingdom.
According to Abdurrahman, a customary leader in Koto Anau, a resident of Koto Anau, originally came from the kingdom of Melayu area. The leader of this group was Rajo Kaciak. This group met with the group that came from Pariangan through Guguk. The exact time of arrival of the first inhabitants of Koto Anau is not known.
.
In the Confederation Kubuang Tigo Baleh, Koto Anau is known as younger brother, Guguak as older brother, Solok as mande (mother), and Selayo as father (sumando). Mande Solok consisted of nine tribes and nine korong, Selayo as the father had thirteen tribes and thirteen jorong, Guguk as sister had six tribes and three koto, and Koto Anau as sister has three tribes and six koto.

The palace of Koto Anau

Characteristic in Nagari Koto Anau in connection with the establishment of a gadang house is that the house must face to Mount Talang which symbolizes that Mount Talang is a place that is respected by the people of Koto Anau. This is related to the pre-Islamic community’s belief that the peak of the mountain is the place where the gods reside, as Mount Merapi is highly respected by the people of Luhak Tanah Datar. 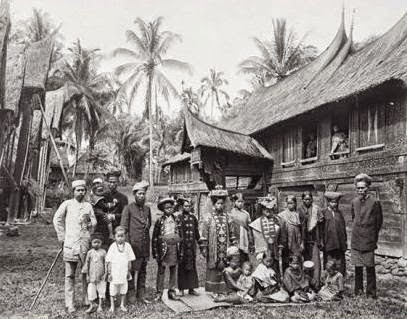