The principality of Mangkunegara was founded in 1757 and exists untill today.  Located in central Jawa, in the city of Surakarta (Solo).

13 august 2021
The Prince of Mangkunegaran Solo, Kanjeng Gusti Pangeran Adipati Arya (KGPAA) Mangkunegara IX (or known as Mangkunegara IX), died of heart disease on Friday (13/8/2021) at 02.30 WIB.
Based on information obtained by CNNIndonesia.com Mangkunegaran IX’s body will be buried on Sunday (15/8). However, funerals can also be held on Saturday (14/8).
KGPAA was born in Surakarta (Solo), Central Java, August 18, 1951. He ascended the throne as the ruler of Pura Mangkunegaran since 1988, a year after Mangkunegara VIII died.
* Foto Funeral Mangkunegara IX, 15 agustus 2021: link

The foundation of the principality of Mangkunegara, 1757

After Sultan Agung I (ruled 1613 to 1645), the power and prestige of Sultanate of Mataram was declining due to a power struggle and conflict of succession within the royal family. The VOC (Dutch East India Company) exploited the power struggle to increase its control on Java, and manage to gain concessions of Mataram’s former colony in Priangan and Semarang. The Mataram seat in Plered near Kotagede collapsed after the Trunojoyo revolt in 1677.
Sunan Amral (Amangkurat II) relocated the palace to Kartasura. During the reign of Sunan Pakubuwono II, in 1742 Raden Mas Garendi (Sunan Kuning) led Chinese mercenaries and launched a revolt against the crown and also VOC. Raden Mas Garendi was the son of Prince Teposono and also the grandson of Amangkurat II. The rebels managed to take control of the Kartasura capital and ousted Pakubuwono II who fled and sought refuge in Ponorogo.
With the help of Adipati Cakraningrat IV the ruler of western Madura, Pakubuwono II regained the capital and cracked down on the rebellion. However the palace of Kartasura was destroyed and considered inauspicious since the bloodbath took place there.
Pakubuwono II decided to build a new palace and capital city in Sala (Solo) village. The transfer of the capital to Sala village is commemorated in chandrasengkala (chronogram) “Kombuling Pudya Kepyarsihing Nata” which corresponds to Wednesday 12 Sura 1670 Javanese year (17 February 1745).

About the principality of Mangkunegara

Mangkunegaran is a hereditary Duchy located within the region of Surakarta in Indonesia. It was established in 1757 by Raden Mas Said, when he submitted his army to Pakubuwono III in February, and swore allegiance to the rulers of Surakarta, Yogyakarta, and the Dutch East Indies Company, and was given an appanage of 4000 households. This was the result of the Salatiga Treaty of 1757.

Traditionally the ruler is called Mangkunegara. Raden Mas Said is Mangkunegara I. The ruler of Mangkunegaran domiciled at Pura Mangkunegaran, which is located in the city of Surakarta. The Mangkunegaran ruler, based on his formation agreement, is entitled to the title Adipati (formally called Kanjeng Gusti Pangeran Adipati Arya Mangkunegara Senopati Ing Ayudha Sudibyaningprang) but has no right to hold the title Sunan or Sultan. Mangkunegaran is a Kadipaten, so its position is lower than Kasunanan and Kasultanan. This different status is reflected in several traditions that are still in effect today, such as the number of bedaya dancers who are seven, not nine as in the Surakarta Sunanate. However, different from the previous Kadipaten, Mangkunegaran had a very broad autonomy because it was entitled to have its own army independent from the Kasunanan.
After Indonesian independence, Mangkunegara VIII (the ruler at that time) declared that he joined the Unitary State of the Republic of Indonesia in September 1946.

The Palace of the rulers of Mangkunegaran was established by Raden Mas Said who signed a treaty with the Dutch East India Company (VOC) in 1757.

——————-
Java, 1757 – Java after the Agreement of Giyanti: Surakarta, Yogyakarta and Mangkunegaran 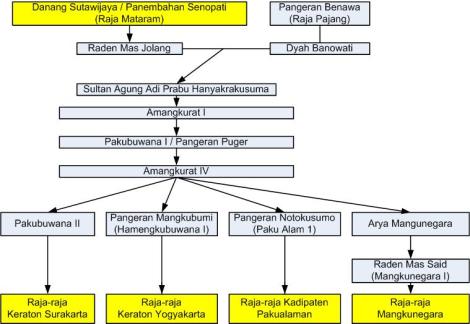 The Mangkunegaran Palace is the official palace of the Mangkunegaran Praja Kadipaten and the residence of its rulers (Sampéyan Ingkang Jumeneng). This building is in Surakarta. This palace was built in 1757 by Mangkunegara I following the palace model.
Architecturally, the building complex has parts that resemble a palace, such as having pamédan, pendapa, pringgitan, dalem, and keputrèn. The entire complex is surrounded by walls, only the pamédan part is given an iron fence.
The keraton was built after the Salatiga Agreement in 1757. Pangeran Sambernyawa, nicknamed for Raden Mas Said, was appointed “Pangeran Adipati “has the title Mangkunegara I.

Mangkunegaran Palace is the palace  of Sri Paduka Mangkunagara in Surakarta and was built after the year 1757  following the model of a smaller palace.

Astana Mangadeg is a burial complex for the early rulers (“Mangkunagara”) and close relative (dalem) of Praja Mangkunegaran. In this complex is buried Mangkunagara I (MN I), MN II, and MN III; each with its own mausoleum. In addition, within this complex is also buried a number of close relatives and the aides of the struggle in the battle against the Sultanate of Mataram and the VOC until it ends with the agreement of Salatiga Agreement (1758).