The kingdom of Selebar is located not far from the river Jenggalu, Bengkulu province, Sumatra.
This kingdom was founded in the 16th century.

History of the kingdom of Selebar

The kingdom of Selebar is originating from the kingdom of Jenggalu and founded by a man whose name is not mentioned. There is another narration which states that the kingdom of Selebar was founded by Rangga Janu, one of the relatives of Mojopahit. Historically, the collapse of the Mojopahit Kingdom was due to the conquest of the Demak Kingdom between 1518-1521 by the Duke of Unus, some of the Mojopahit nobles who were also traders to Bengkulu.
It is in this century that Rangga Janu and his sister Rangga Beru arrived in the Bia Paku area of Jenggalu Kingdom, and settled. Then followed his younger brother Rio (Ario), who was charmed by the king, so he made him head of Bia Paku area and was given the title of Rio Kajang Sebidang. After King Jenggalo died, the people chose Rangga Janu as his successor because of his wise acts. This incident occurred around the year 1565. He moved his place to Bandar Selebar which was more strategic and profitable for trading in the bay Selebar, safe from the ferocious wave of the Indian Ocean. From that time the kingdom was known as the kingdom of Selebar, with king Rangga Janu, titled Depati Payung Negara. 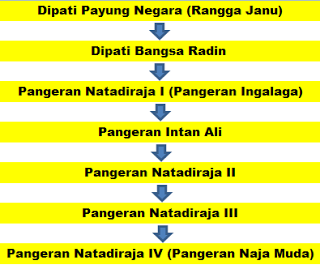 Prince Nata Dirja or Tuanku Bangsa Radin was the king of the kingdom of Selebar which is located not far from the river Jenggalu. Prince Nata Dirja was a wise king, always thinking of the interests of his people and greatly respecting the guests. Provided that the guest were showing good intentions and maintaining courtesy.
When the Dutch empire sent its merchant ship through the Jenggalu river, the prince Nata Dirja welcomed him well because the trade envoy was about to engage in mutually beneficial cooperation.
Prince Nata Dirja welcomed them with kindness and hospitality. The Royal Dutch merchant’s delegation purchased the fruits of the people of Selebar, such as Pepper and other crops at a good price. Bandar Selebar at the mouth of the River Jenggalu increasingly crowded with the trade of crops and make people more prosperous Prosperous under the leadership of Prince Nata Dirja.
Not far from the kingdom as wide as there were two neighboring kingdoms: Sungai Hitam and Sungai Lemau; the two kingdoms had trade relations with the British Empire. It seems that Britain wanted to expand its influence and send its envoys to the kingdom of Selebar.

History of the kingdoms in the Bengkulu area

The first European visitors to the area were the Portuguese, followed by the Dutch in 1596. The English East India Company established a pepper-trading center and garrison at Bengkulu (Bencoolen) in 1685. In 1714 the British built Fort Marlborough, which still stands.

In 1785, the area was integrated into British Empire as Bencoolen, while the rest of Sumatra and most of the Indonesian archipelago was part of the Dutch East Indies. Despite the difficulties of keeping control of the area while Dutch colonial power dominated the rest of Sumatra, the British persisted, maintaining their presence for roughly 140 years before ceding Bengkulu to the Dutch as part of the Anglo-Dutch Treaty of 1824 in exchange for Malacca. Bengkulu then remained part of the Dutch East Indies.