Intervention of the dutch / Puputan Klungkung 1908 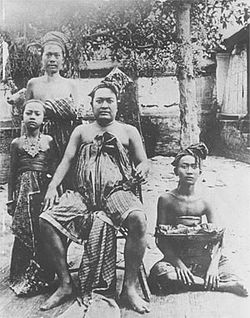 The intervention was triggered by a Balinese revolt against a Dutch attempt to impose an opium monopoly in their favour. The raja of Karangasem opposed the monopoly, leading to riots in the capital of Klungkung Riots also erupted in Gelgel, when the Balinese killed a Javanese opium dealer.

The Dutch sent troops to quell the riots. In Gelgel, they killed 100 Balinese, forcing the Raja to flee to Klungkung.The Dutch then bombarded the city of Klungkung.

In a final confrontation on 18 April 1908, Dewa Agung Jambe, the Raja of Klungung, accompanied by 200 followers, made a desperate sortie out of his Palace, clad in white and armed with a legendary kris supposed to wreak havoc on the enemy according to a prophecy. The kris failed to fulfill the desired outcome, and the Raja was instead shot by a Dutch bullet. Immediately, the six wives of the king resorted to ceremonial suicides, or puputan, killing themselves with their own kris, soon followed by the other Balinese in the procession.

The Dutch burned the Royal Palace to the ground. As Klungkung came under Dutch power, the Raja of Bangli submitted and in October 1908 negotiated for a Dutch protectorate similar to that of Gianyar and Karangasem.These events ended Balinese resistance to the Dutch. 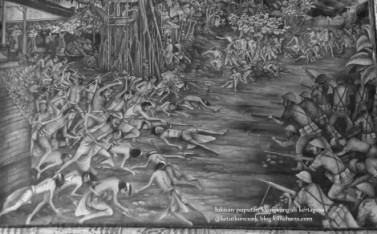