The kingdom (Dalu) of Todo was located on the island of Flores, District Manggarai, prov. Nusa Tenggara Timur. 16th Century.

Location district of Manggarai on Flores

Line of kingdoms on Flores: link

About the Dalu in the Manggarai region

Robert MZ Lawang of the University of Indonesia (UI), mentions, that Bajo was one of 3 Dalu, located in West Manggarai, which was directly under the control of the ‘king of Naib’. The Naib king was the representative of the Sultan of Bima and he was located in Reo and Pota, North Manggarai. The other Dalu were Todo and Cibal.
Dalu was an administrative system of the Sultanate of Bima that was associated with tax withdrawal in the form of slaves (taki mendi tax). In 1660, hundreds of Manggarai workers supplied by Bima arrived in Batavia to be employed as Dutch slaves. Manggarai workers who were described as good-hearted, hard-working and cheap-paid workers. Below the Dalu, there wa the ‘gelarang’ which was the head of the lower administrative area. The Dalu and Gelarang, are Bima’s remains in the socio-political structure of the Manggarai region.

In Bima’s administration, Dalu Bajo was one of the direct-controlled “naib Reo” in addition to other parts of the Eye Wae to Lambaleda (North East Manggarai) range. Dalu, was refered to the people and territory of his power. In the past, there were three big Dalu: Cibal, Todo and Bajo, because they were directly under the naib.

The stone structure of the former Todo royal fort (doc.Roman) 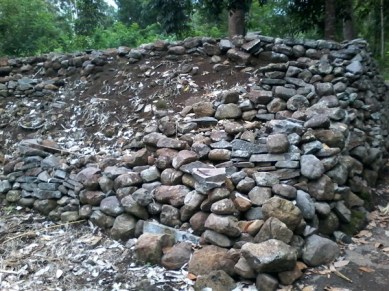 History of the Dalu Todo

Todo was a Dalu (kingdom) in the Manggarai region of the island of Flores.
In the 1700s or perhaps earlier, in Manggarai there was  a system of government from three large groups of people, namely Todo, Cibal and Bajo (Daeng 1995). In 1727, a son of the Sultan of Bima married a Princess from the Sultanate of Makassar, daughter Tamima. Manggarai area was later handed over as a wedding present and Tamima established the Islamic Kingdom in Reo.

In 1732 there was an alliance with Bajo to attack Reo from the sea and drive out the Makassarese in Reo. However, this attack failed, and Todo was asked to help. Todo used this opportunity to gain hegemony and influence over the interior of Manggarai by conquering local rulers in the interior.

The rising hegemony of Dalu Todo was apparently disliked by the Dalu Cibal which considered Dalu Todo was not the original Manggarai but Minangkabau descendants. The rivalry between these two Dalus then resulted in several open wars which were then won by Dalu Todo. These wars were (18th century):
* Weol war I,
* Weol II war won by Todo so that the boundary of Todo’s kingdom was no longer up at Wae Ras near Cancar, but went until Beo Kina (North Rahong),
* Bea Loli war in Cibal. In the war of Bea Loli, Cibal again lost.
* Adana Tana Dena was. Due to war of Adak Tanah Dena, the boundary of Todo-Pongkor was extended to Watu Jaji.

At the time of Todo-Pongkor concentration following the war Adak Tanah Dena, troops of Nggaeng Cibal launched an attack to the center of power of Todo-Pongkor. The custom house of Todo was burned, but burning down the house was not possible. The troops of Nggaeng Cibal then tricked an old lady whose name was Kembang Emas, a sister of Kraeng Mashur Nera Beang Lehang Tana Bombang Palapa to find out why niang dangka could not be burned.
The woman then told the niang dangka could be burned if can take away the existing talisman. Troops from Cibal then took the amulet.  At last the niang dangka could be burned down. Unfortunately, they also burned a women who told about the whereabouts of the talisman.

In 1907 the Dutch entered Manggarai and wanted to establish a civil authority center in Todo. However, due to its unfavorable topography, they moved to Puni, Ruteng. The Dutch officially conquered Manggarai in 1908.

In the course of its history, the Dutch saw Manggarai, including Wae Mokel awon (east border) and Sape Strait salen (western border) as a unified whole. No more Cibal, no more Todo, no more Bajo, it was now called Manggarai.

In 1925, through a decree from the Netherlands, Manggarai became a kingdom and someone of the Todo-Pongkor people became the first king, King Bagung of Pongkor. 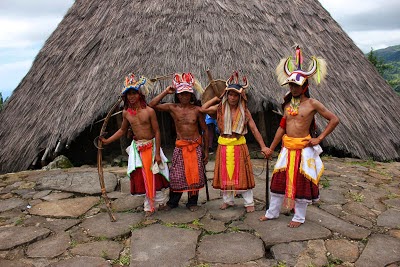 History of the region of Manggarai

The article below was written by Vianney Andro Prasetyo, an alumni of the Australian National University.
Source:  http://www.floresa.co/2016/05/02/potret-sejarah-manggarai-dalam-sejarah-nusantara-sebuah-studi-literatur/

The western area of Flores (Manggarai) in the past was ruled by the Bima Kingdom until early 1900. Bima became the Islamic Kingdom because of the influence of the Sultanate of Gowa which embraced Islam in 1605 and later formed the Sultanate of Makassar. Bima which was conquered by Gowa converted to Islam. As a conquered area, Bima send tribute to the Gowa ruler.

This situation lasted until the year 1667 when there was the Bungaya Agreement between the VOC and the Kingdom of Gowa which at that time controlled Bandar Makassar. Gowa which felt harmed by the treaty, continued to fight under Sultan Hasanuddin’s leadership until it was finally defeated by the VOC in 1669. This war is known as the War of Makassar (1666-1669).
Areas that managed to escape from the power of Gowa due to this agreement and war were Makassar, Bone and Bima. In 1669, Bima subsequently surrendered and signed a trade agreement with the VOC. Furthermore, Bima became the sole ruler of Manggarai recognized by the VOC (Daeng 1995).

In the 1700s or perhaps earlier, in Manggarai there was a system of government from three large groups of people, namely Todo, Cibal and Bajo. In 1727, a son of the Sultan of Bima married a Princess from the Sultanate of Makassar, Daughter Daughter Tamima.
Manggarai area was later handed over as a wedding present and daughter Daeng Tamima established the Islamic Kingdom in Reo, north coast of Manggarai. Sultan Musa Lani Alima from Bima did not agree to make Manggarai as a gift to the Sultanate of Makassar. So in 1732 there was an alliance with Bajo to attack Reo from the sea and drive out the Makassarese in Reo. However, this attack failed to create a new force with the help of Todo from the south (Daeng 1995).

Todo used this opportunity to gain hegemony and influence over the interior of Manggarai by conquering local rulers.  Due to unequal power, Daughter Daeng Tamima finally surrendered and returned to Makassar. Thus the influence of Bima on Manggarai could still be maintained.
After securing power in Manggarai, Bima made Reo the center of government in Manggarai by appointing a representative of Sultan Bima called Naib. Representatives of the Sultan of Bima were also placed in Labuan Bajo, Pota and Bari. In Manggarai, the Sultanate of Bima spearheaded a system of government called kedaluan and gelarang. Gelarang had a status under the Daeng (Daeng 1995).

In 1732, there were representatives of the Sultan of Bima in Reo, Pota, Bari and Labuan Bajo, three large dalu; Todo, Cibal and Bajo who had no coordination relationship with Naib in Reo and also other small dalu. Furthermore, Dalu Todo also oversaw thirteen smaller dalu: Kolang, Lelak, Wontong, Welak, Ndoso, Ndeles, Rahong, Ruteng, Poco Leok, Torok Golo, Sita, Riwu and Manus, but still paid tribute to the Naib in Reo. Meanwhile, Dalu Cibal and Dalu Bajo did not oversaw other small dalu but also paid tribute to Naib in Reo (Daeng 1995).

Persons who had a coordinated relationship with Naib in Reo were Ruis, Pasat, Nggalak, Rego, Boyfriend, Boleng, Kempo, Nggorang, Mburak, Lo’ok and Lambaleda. Meanwhile, the depths that were in the coordinate line with Naib in Pota are Congkar, Biting and Rembong (Daeng 1995). In its development, the Manggarai area was divided into 38 genera (Steenbrink 2013).

In 1925, through a decree from the Netherlands, Manggarai became a kingdom and someone from the Todo-Pongkor people became the first king, King Bagung of Pongkor.
The Kingdom of Manggarai was made up of 38 dalu. Along with the appointment of King Bagung, the Netherlands also sent Kraeng Alexander Baruk to Manado.

Alexander Baruk was the son of Kraeng Tamur, king of Todo. In 1931/1932, Alexander Baruk came back from his school. He was appointed as king of Manggarai. However, since the king Bagung was still alive, there were two kings. King Bagung as “raja bicara” and the one who was responsible, was King Baruk.
The power of both ended when both died. King Bagung died 1947. Meanwhile, King Baruk died 1949. Later, both were replaced by Kraeng Langkas or Kraeng.

Remains of the old fortress of the kingdom of Todo (dok.Roman)

Weapon from England, of the kingdom of Todo