The kingdom of Meureudu was located on Sumatera, District Pidie Jaya, prov. Aceh.
During the sultanate of Aceh this kingdom was a vassal or subordinate to the sultan of Aceh and was led by the king who had the title of Uleebalang.
After the end of the Aceh War, in 1914, the small kingdoms entered a Onderafdeling as “swapraja”. 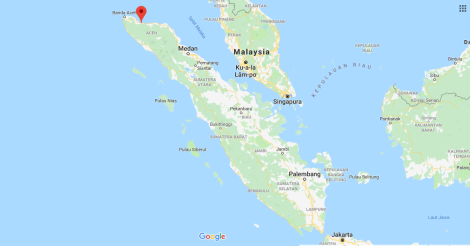 Meureudu State had been founded and recognized since the time of the Kingdom of Aceh. When Sultan Iskandar Muda came to power (1607-1636) Meureudu was increasingly privileged. Become an area free of the rule of the kingdom. Only one obligation Meureudu had, providing logistical supplies (rice) for the needs of the kingdom of Aceh. Until the Kingdom of Aceh collapsed, Meureudu was still a free country.
The privileges of Meureudu continued until Sultan Iskandar Muda who was replaced by Sultan Iskandar Tsani. In 1640, Iskandar Tsani appointed Teuku Chik Meureudu as the definitive ruler of the kingdom. He was the eldest son of Meurah Ali Husein, who was named Meurah Johan Mahmud, which had the title of Teuku Pahlawan Raja Negeri Meureudu.