The Haturosan Sultanate (Pasaribu dynasty), 13-16 centuries, was a kingdom in Barus Hilir, or the western part of the Batak Land, Kab. Central Tapanuli, West Sumatra province.
In 1524, the area of ​​the Barus sultanate was controlled by kings of two dynasties, namely:
* Barus Hulu, Pardosi dynasty from Toba.
* Barus Hilir, Hatorusan Dynasty from Tarusan, Minangkabau, descended from King of Pagaruyung. 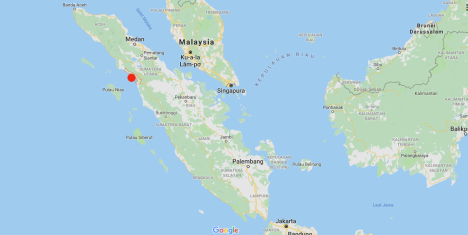 History of the kingdom of Hatorusan (Barus Hilir) (dynasty Pasaribu)

The Hatorusan Dynasty was founded by King Uti, son of Tateabulan. When the Sorimangaraja Dynasty ended in the southern part of Batak land (Tapse), then this Hatorusan Dinati ended in Barus, or western Batak land.

The history of the regeneration of Raja Uti, starting from 1000 years BC until one of his descendants who was entitled King Uti VII in the 1500s, is not documented in a clear calendar. But in general, he had several offspring, whose name were known. However, it is possible that between one name and another, they were hundreds of years apart. Because the Hatorusan kingdom was disappeared and reappeared again.

During the reign of King Uti VII, 16th century, royal rule became weak. The expansion of the kingdom had expanded to several areas in Aceh. Raja Uti VII was said to have moved the capital of the kingdom to its territory in the north which now enters the coast of Aceh.

The King VII had several commanders including a very tough commander who also happened to be his own nephew. The son of a sister, Boru Pasaribu. His name was Mahkuta alias Mahkota which is known among the Batak as Manghuntal the son of a father from the Sinambela clan from the center of Batak. He was educated at the royal court and became the Commander, who controlled the the Army and the Sea.

When the Portuguese first attacked the area, Panglima Mahkuta led his army and won the battle. Apart from being attacked from outside, the kingdom also got rebellions in the country.

Mahkuta was ordered to put down the rebellion in the center of the Batak. In an effort to crush the rebels, the royal capital saw coups and power struggles. Kingdoms split into small kingdoms. Mahkuta alias Manghuntal founded the Sinambela Dynasty (Sisingamangaraja) in Bakkara.

Meanwhile, the Pasaribu community in Barus, descendants of Raja Uti, continued the hegemony of the Pasaribu dynasty with the installation of Sultan Ibrahimsyah Pasaribu to Sultan in Barus Hilir. There is a historical opinion which says that Sultan Ibrahimsyah Pasaribu was the one who gave the power to Manghuntal, Mahkuta, to establish his kingdom in Bakkara. Thus he was the one who had the title of King Uti VII (?).

The first dynasty is the Sori Mangaraja dynasty led by a hereditary king with the title Sori Mangaraja which is the language adaptation of the title Sri Maharaja. This dynasty existed for almost 300-500 years, from the 7th century to the 12th century AD. The center of government and its capital were located in Lobu Tua, Barus and Pansur, which were used as port cities and trading centers. The end of this dynasty occurred due to an attack by the Chola kingdom which originated from India with the Srivijaya kingdom including its territory.

2) Hatorusan dynasty (clan of Pasaribu), until the 15th century.

The Hatorusan dynasty attempted to rebuild the city’s structure, traditions and glory of the Sori Mangaraja dynasty. The Hatorusan dynasty was led by a king, who had the title King Hatorusan, the first king was Uti Mutiaraja, who came from the descendant of Guru Tatea Bulan, Pusak Buhit. The territory of his power was in Barus to the border of the Aceh region. In the early 15th century, the reins of power were handed over to the Sisingamangaraja dynasty of the Bakkara Country known as the Bakkara kingdom which is now called Balige.

The Pardosi dynasty ruled in Barus Hulu, which covered several areas of western Batak lands including Negeri Rambe (Pakkat). Founded by Raja Alang Pardosi with an unclear history, but it is believed to have existed since the early days of the kingdom of the Batak King in Batak Land, which is approximately 1000 BC.

– History of the Dynasty’s in the region of Bakkara: http://landofbakara.blogspot.co.id/2012/06/three-dynasty-kingdom-of-old-batak-in.html